How old is carpet?

Evidence of knotted carpet go back to the seventh millennium BC. The oldest surviving carpet hails from the 4th or 5th century BC and originates from Siberia.

History of Carpet in America

The (United States) carpet industry was started by William Sprague at a mill he erected in 1791, in Philadelphia Pennsylvania. The industry changed in 1839 when Erastus Bigelow invented a power loom that ran on steam and produced 50% more than carpet per day than older hand looms. Bigelow went on to invent a machine to weave Brussels tapestry that was featured in the London Worlds Fair in 1851.

In the early 1900's, Catherine Whitener eloped a method of making bedspreads by sewing a running stitch through thick cotton yarn. Once the yarns were set, they were clipped and fluffed to create a tuft, referred to as chenille. The word chenille is French for caterpillar for which the fabric has a resemblance. This design went on to be incorporated into carpet weaving, where an automated tufting machine was introduced in the early 1930's. Over the years tufted carpet has become the norm.

Synthetic fibers were introduced in the mid 1940's. These fibers have excellent qualities that compare favorably to wool, while costing significantly less. Important milestones include the introduction of nylon in 1947, polyester in 1965 and shortly thereafter olefin (polypropylene). Today over 90% of carpets are tufted rather than woven. 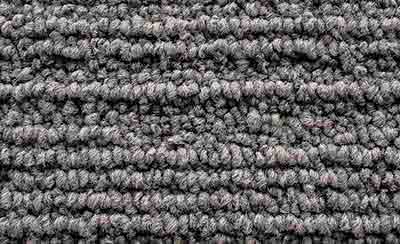 Brussels Carpet Brussels carpet is a type of carpet or rug made with loops of uncut pile that are often woven into complex patterns. All the colors run through the carpet along the warp and are brought to the surface as needed to make the pattern. Brussels carpet is thought to have originated in Brussels Belgium. 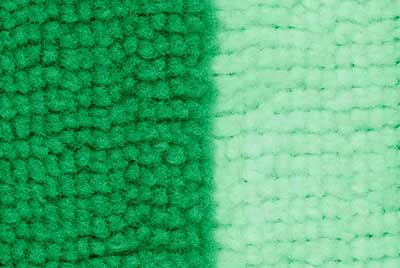 Wilton CarpetWilton carpet is similar to Brussels carpet in that the pattern in the carpet comes from pulling the warp to the surface to expose different colors. It differs from Brussels in that the loops that are pulled are cut. Wilton carpet is named after the town in which it was invented in the United Kingdom. Wilton carpets can be made using up to 5 colors.

Unlike Wilton and Brussels carpet, Broadloom is woven on a wide loom. Like Wilton it is a tufted carpet. With a wide width of up to 12 or 15 feet, the carpet is typically installed wall to wall.

Introduced by Mohawk carpet in 1908, the carpet is a broadloom tufted carpet, it became so popular that mills ran the same loom pattern and colors for years at a time.

Axminister carpet is a uniquely different style of tufted carpet. Instead of running the colored threads through the warp continuously, a set of grippers rise from the loom bed. The gripper grabs the appropriate color of yarn, pulls it down, cuts the pile, and returns to the loom bed. It is secured in place by the weft. Such a process, conserves yarn during construction.